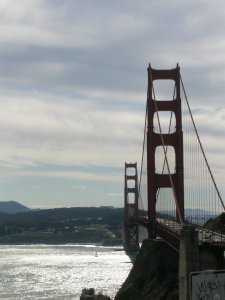 The second biennial book fair, Considering the Book as a Work of Art, took place on the campus of the University of California, Berkeley February 8 – 11. Around 140 artists from around the country and the world rented tables, showed books and attended the symposium. The talks took place in the mornings and the fair in the afternoons. I rented a table and also attended most of the symposium.

My favorite talks were Karen Bleitz and Ron King. Karen makes books with machines, pop-ups, and magnets which become dynamic stages. Ron King formed Circle Press in 1967 and gave a great talk about his life and work. He might be best known for a pop-out alphabet poster that you can still buy. While his work is often graphic and mixes bold silk screen with the text, his new work is a series of sculptural Logbooks made of logs. Since there were so many artists at the fair, the opportunity to meet and talk to people was endless.

The Codex organizers have done a great job creating a friendly forum for everyone who loves books!

The Codex web site is: http://www.codexfoundation.org
by Alice Austin

View all posts by boxturtle